The First Knights from the Company of the Crimson Hawk 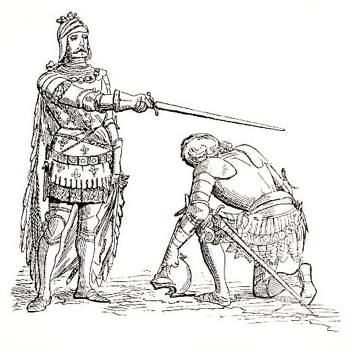 Mini-Adventure: The Construction of Crimson Hall
All the players were present for the mini-adventure. Up until now, the squires of the Company of the Crimson Hawk have not had a place exclusively for them to use as a barracks. In light of the wondrous accomplishments of these squires, Earl Dafydd had a building constructed for this purpose, and named it Crimson Hall. The stones which compose the hearth of the fireplace contained the names of the initial members of the Company of the Crimson Hawk. Observing the construction of this building allowed the squires to make checks for Industry, Stewardship and Honor.

Fancy Dress Ball
A fancy dress ball (i.e., costume party) was held in Beale Valet to celebrate the upcoming knighthood ceremony. The below list shows how the couples were paired at the ball (with their costumes displayed in parentheses). Note that Donecus, Galien and Turpin all invited Solei to be their date, but (based on the Pure Companionship scores at the time) she decided to go with Turpin. Donecus ended up taking Gwendoci and Galien ended up accompanying Gerhilda. In all other cases, the squires accompanied the initial woman they invited.

All the squires failed their Dance skills. Of the two who were in shark costumes, Celsus failed his roll the worst, and so it was determined that he was “Left Shark.” This was in reference to the recent Katy Perry halftime show at Super Bowl XLIX, which featured two dancers in shark costumes. For whatever reason, the dancer on the left messed up the routine, but with an awkwardness that actually stole the show, fostering the “Left Shark” pop culture phenomenon (although probably soon to fade from the country’s collective conscious; I’ll try not to shed a tear).

As a side note, many men would have liked to have accompanied Avina, the daughter of Sir Martonus, to the ball. But Martonus requires that anyone who wants to date her must formally ask his permission in front of the statue of St. Michael within his estate at High Tower. As we now know from the squires prior to visit to High Tower (i.e., Session 6), only a person with a Christian Religious Bonus can make it far enough through the mystical barriers of the garden to reach the statue. Therefore, most potential suitors of Avina do not even try, but Athras was able to successfully meet the challenge of asking permission to take Avina to the ball in front of the enchanted statue.

Knighthood Ceremony & Initial Quests
A.D. 501 saw the first set of Crimson Hawk squires being knighted. The ceremony took place at the castle in Beale Valet, with Earl Dafydd officially bestowing the title. The following squires took the oath and became bachelor knights (with the ceremony being likewise conducted in the Guild Hall by the GM using the Sword of Destiny).

Each of these players also received a sword-pen to commemorate the occasion.

In terms of the customary “leap” that a newly made knight attempts (i.e., leaping onto his horse while in full armor, which, in game terms, means a DEX check), all of them made it except for Donecus and Romulus.

It so happened that a number of people were in court that day imploring the earl for help with some matter. The earl had the newly made knights engage in a horse race to determine the order in which they would choose which quest they wanted to accept. The horse race was completed in the following order: 1-Galien, 2-Athras, 3-Damahaut, 4-Riorden, 5-Romulus, 6-Turpin, 7-Donecus.

The Adventure of Sir Galien & the Marsh Troll
Galien chose a quest to deal with a murdering thief known as Scary Harry. It was not until he accepted the task that the peasant who reported the incident nonchalantly revealed that Scary Harry was a marsh troll. As to be expected, Scary Harry was an extremely dangerous opponent, and in the ensuing battle Galien had to resort to drinking a potion of Aria’s Excellent Benevolence (i.e., Galien was hit for a whopping 26 points of damage). Nevertheless, he was able to knock the troll unconscious and deliver the killing blow.

The Joust Between Sir Athras & Sir Eldgrim
Sir Eldgrim, formerly a squire of the Company of the Iron Fist, set up a pavilion by a pond in the woods near Beale Valet. He denounced the prowess and courage of Huntington knights (he actually used the word “cretins”), and claimed he would take on all challengers. A Huntington knight named Sir Cadwy was bested and sorely wounded in a joust with him, and his squire came to Beale Valet to report the incident. Seeing as Athras defeated Eldgrim two years earlier in the Honorable Challenge of the Huntington & Brun Squires (see the description of Session 5), he elected to accept this quest. History repeated itself, as Athras was once again victorious over Eldgrim.

The Adventure of Sir Damahaut & the Baby Snatcher
A peasant couple named Bowen and Wynne implored Damahaut to rescue their baby from an elven creature named Drystan of the World of Mists. Drystan challenged Damahaut to answer a riddle, promising to return the child if he guessed the answer correctly. But if he failed then the baby would remain in the World of Mists forever. Damahaut had no trouble in guessing the riddle and the baby was saved.

The Adventure of Sir Riorden & the Ghost Dog
A peasant boy named Tomat told the story of his father, Walter, who was a renowned hunter. Walter went after a huge boar but neither he nor his pack of hounds returned. After this, a ghostly wolf was occasionally seen in the woods at night. Riorden agreed to undertake this quest and solve the mystery. He discovered that the phantom canine was not a wolf, but a hound (no one prior to this was brave enough to get a close look at the apparition). More specifically, this was the ghost of Walter’s most faithful hound, and it led Riorden to the spot where the bodies of Walter and the dogs were. The remains still lay in the spot where they had been savagely killed by the boar. Around Walter’s neck was an iron key on a cord which unlocked a secret cash box at the home of Tomat and his mother (they were previously unaware that Walter had been putting away money for their future). The ghost dog’s mission was to scare the boar away from the area until someone could recover the key and save Tomat and his mother from destitution. Having done so, this phantom was never seen again. Riorden successfully met the various challenges of this quest, including controlling his fear in order to follow the ghost dog, spotting the key and finding the secret chest. He also made sure that Walter and his hounds were properly buried.

The Adventure of Sir Romulus & the Three Maidens
A nun named Sister Emmot led Romulus to three maidens, each requesting assistance. He was told that he could only pick one of these quests. The youngest of the three was Gwendoci (see same who danced with Donecus at the fancy dress ball) who lost her golden comb in a muddy area. She insisted that her beautiful hair was too precious to be touched by combs of lesser quality, and obviously she wasn’t going to root around in the muck to find it. If Romulus found her comb, she promised to arrange for him to get a great deal on one of her father’s famous warhorses, and put in a good word for him if he requested to pursue Pure Companionship with her. Gwendoci considered this an urgent situation because her hair was “mussed” and she could not be seen in public until it was properly combed.

The second maiden was Lady Lessent of Lonazep County. Her husband was the late Sir Hemmet who once put down a peasant rebellion. As a deterrent to any future rebellions, Hemmet made an example out of the leader of the rebellion, a farmer named Colley, and his family. Colley was beheaded and his skull was turned into a drinking goblet while his wife and children were hanged. Hemmet recently died and the drinking goblet was stolen. Lessent suspects that the theft was perpetrated by Colley’s family who wanted to reunite Colley’s skull with his other remains. She offered Romulus a bag of 150 d. to retrieve the goblet.

The third maiden was a poor widow named Millis. Her lord fled the area of her village due to the Saxon encroachment, and a savage bear was ravaging her farm and livestock. The other villagers coveted her land and refused to help, hoping that she would leave. She wanted Romulus to kill the bear but was too poor to offer any reward.

Romulus decided to accept the quest presented by Millis, and he successfully tracked down and slew the bear. In so doing, he succeeded in an even greater test, which was a test of chivalry. He was not motivated by a reward, but instead chose the quest involving the greatest danger to the weakest person.

The Adventure of Sir Turpin & the Brigands
One of the earl’s cattle hands reported that three brigands (part of the band of miscreants who follow Regmar the Brigand King) have stolen some of the earl’s cows. Turpin tracked them down. After refusing their demand to surrender, Turpin fought all three of them at once. He killed one of them and knocked the leader of the band unconscious. The third surrendered. Turpin successfully completed this quest by dealing justice to the outlaws and returning the stolen cattle.

The Horse Race Between Sir Donecus & Sir Ladras
Donecus accepted a challenge from a knight named Sir Ladras in terms of a horse race. Ladras promised to give Donecus a fine new saddle if he beat him. Although Donecus rode with great skill, and the race was close, Ladras won.

The Brawl in Crimson Hall
Celsus and Jaufre went to Crimson Hall to meet the new squires of the Company of the Crimson Hawk. One of them, Tagras, declared himself to be in charge (as Squire of the Pool) and had a big squire named Vad the Mad acting as his enforcer. As far as Tagras was concerned, the reported exploits of Jaufre and Celsus, as well as those of all the founding members of the Company of the Crimson Hawk, were just a bunch of hyperbole. He claimed that he and Vad the Mad possessed true prowess and demanded that Celsus and Jaufre show them proper respect and obedience. Naturally, Celsus and Jaufre did not accept any of this, and a duel ensued with all the other new squires looking on. Jaufre squared off against Vad while Celsus pitted himself against Tagras. Celsus was knocked down, but Jaufre managed to defeat both of the boastful upstarts. The other squires declared Jaufre to be the real Squire of the Pool.

Sir Donecus & the Witch
Sir Donecus continued to meet with Minerva (i.e., the Witch of Raven Wood) annually in order to provide her with ingredients for the ongoing enchantment of his sword.