The Quest of Raul the Foole 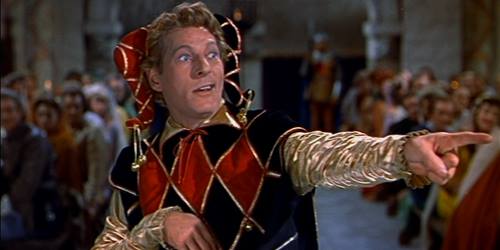 Mini-Adventure: The Art of Courtly Life
Everyone present in the above Roll Call was likewise present to participate in the mini-adventure. The Lady Claressant was concerned that the knights and Celsus were too ignorant in terms of courtly manners. Therefore, she invited them to a special luncheon and gave them some tips and training on how to behave in formal settings. The feast allowed them to put various “genteel” skills to practice, including a poetry contest.

Rumors
The brigands belonging to Regmar’s band who were captured last year are currently in prison in Beale Valet. The Black Shields refused to talk, but the lesser brigands did. They claim that Regmar has been learning magic from a mysterious spell book, and uses enchantments to keep his outpost hidden. Even his followers cannot locate it without his direct intervention.

It should be pointed out that over the past few years, Earl Dafydd has repeatedly sent troops into the local forests trying to find the lair of Regmar and his men. Such missions were always fruitless.

The brigands also claim that Regmar has been teaching magic to his three sons. They are destined to be even more powerful, and possibly even more ruthless, than Regmar himself.

Knighting Ceremony
Earl Dafydd knights Jaufre. He is now a bachelor knight of the realm.

The Quest of Raul the Foole
Raul, the court jester of Beale Valet, send the knights, plus Celsus, on a kind of scavenger hunt. The Countess Lanna lent him her bracelet to hide somewhere in town. The characters were to undergo a series of challenges in order to win wooden coins. Each coin was to then be taken to the Castle of Beale Valet and given to Sir Gorn sans Humour. He would then exchange the coin for an item from the kitchen which would serve as a clue to where the bracelet was hidden. Such clues were officially called, “Magnificent Awe-Inspiring Quest Items.” Theronde the Sage was designated as the “Clue Master”, meaning that he would give out clues to help the characters, if needed. The fewer the amount of clues requested by the players, the greater the rewards that could be won.

On the other hand, failure to find the bracelet would result in Raul the Foole lampooning the characters. This would cause each character to lose 100 points of Glory.

Challenge #1: Horse Race
The characters competed against hunters in a typical horse race. Damahaut came in 1st Place. The Magnificent Awe-Inspiring Quest Item was a jar of icing.

Challenge #2: Rescue Sweetums
The characters visited an old widow named Lady Dillia, whose cat, Sweetums, was stuck in a tree. Despite the daunting task of conducting an opposed DEX roll against an untrusting cat, Galien successfully pulled off the rescue mission. The resulting Magnificent Awe-Inspiring Quest Item was some tea.

*Challenge #3: Joanette’s Riddle"
Next the characters met with Joanette in the Great Hall of the Castle of Beale Valet. She presented the following riddle: “A hundred feet up in the air, but its back is on the ground. What is it?” Damahaut won the right to guess first, and he correctly discerned the answer to be a flipped over centipede. The allowed the party to attain a Magnificent Awe-Inspiring Quest Item in the form of mustard.

Challenge #4: Searching the Wine Cellar
Sir Gorn sans Humour instructed the characters about the nature of the next quest. They were to take turns searching through the dark wine cellar by the light of a single, small candle. They were to find a particular bottle of wine, the label depicting it to be from the Vineyards of the Bellicose Bluffton Bastard and his Beastly Belligerent Beholder. Romulus was the first one to try, and he succeeded, gaining the next Magnificent Awe-Inspiring Quest Item, which was a spoon.

Challenge #5: The Duel
For the final part of the quest, the characters squared off with one another in non-lethal duels. Sir Edam was there with his trusty mace to compete against the them. In the first round, Damahaut defeated Edam, Galien defeated Turpin, Riorden defeated Jaufre, and Romulus defeated Celsus.

In the second round, Galien defeated Riorden, and Damahaut defeated Romulus. In the third, and final round, Damahaut defeated Galien. Of course, all that was needed to win the last Magnificent Awe-Inspiring Quest Item was to defeat Sir Edam. This last quest item was some honey.

The party then attempted to figure out how the five Magnificent Awe-Inspiring Quest Items unlocked the secret of the location of the countess’ bracelet. After everyone tested a couple of erroneous theories, it suddenly dawned upon Josh K. that the first letters from each of the quest items could be assembled to form the word “smith.” They then visited the somewhat unstable blacksmiths, Valter, Hamon and Hablet, and retrieved the bracelet. Therefore the characters successfully completed the Quest of Raul the Fool, and did not need to get a single clue from Therondre the Sage in order to do so.

The Creepy Raven
While taking the bracelet back to the castle, the party noticed that a large ominous looking raven was greedily eyeing it. Unlike normal ravens, this one had a blood red beak, and blood red feet & claws.