Origins:
Galien is the son of Sir Gautier, a French mercenary knight from Anjou, and Lady Lisad. Lisad was originally a commoner, a barmaid to be exact, who died while giving birth to Galien. She used to sing the verse of a song while she carried him in her womb. It is supposedly a very old and obscure song that originated with a mystical bard on her side of the family. The verse goes as follows:

“The mist rises from the frosty lake;
the greenfinch breathes it in.
It sings it forth until leaves shake,
and summons the Winderlin.”

Lisad once told Gautier that on the day Galien discovers the next verse, something marvelous and terrible will befall him. The big question is, what (or who) in the blue blazes is the “Winderlin”?

480: Birth of Galien in Anjou to Sir Gautier and Lady Lisad. Lisad dies in childbirth.
493: Gautier hears that Earl Dafydd of Huntington County, Logres, is hiring large numbers of mercenary knights to assist in his battles against Saxon encroachment. Wanting to take advantage of this opportunity, Gautier takes Galien to the town of Beale Valet and begins his employment for Earl Dafydd. Later that year, Gautier is killed by a berserk when Saxon forces free kings Octa and Eosa from their imprisonment in a castle in the Duchy of Silchester.
495: Squired – Galien becomes an original member of the newly formed Company of the Crimson Hawk (Town of Beale Valet). Mentored under Sir Edam. As a squire, Galien participates in the Battle of St. Albans, protecting the supply wagons of the forces of King Uther Pendragon from a Saxon attack. He also attends the funeral and burial of Uther at Stonehenge.
496: Meets the daughters of Sir Galadorn.
497: Investigates the haunting of the Manor House of Lonely Elm.
498: Battles Saxon marauders in the forest near the Village of Langster.
499: Participates in an event known as “The Honorable Challenge of the Squires,” which pits the Company of the Crimson Hawk against the Company of the Iron Fist (i.e., some squires from the Barony of Brun). The challenge includes non-lethal combat (in which Galien defeats Haveron) and other tests of skill. Huntington proves to be the winning side at the end of the day. The Honorable Challenge of the Squires eventually inspires the concept of bohorts featured in tournaments.
500: Travels to Sycamore Castle to assist in ransoming Sir Emeric (the father of Dragan) from the Saxons. Emeric relates how Sir Taurinus, the father of Donecus, was imprisoned with him, but he escaped in 494 after believing that he would never be ransomed, and declaring the life of a mercenary knight to be foolish. Emeric does not know the whereabouts of Taurinus.
501: Attends a fancy dress ball with Lady Gerhilda as his date. Galien is dressed as a badger and Gerhilda is dressed as a dragon.
Knighted by Earl Dafydd of Huntington. Sir Galien becomes a bachelor knight residing in the Town of Beale Valet. During this same year, he slew a marsh troll known as Scary Harry who had been preying upon some of the peasants in Huntington County.
502: Assisted in freeing villagers from Regmar the Bandit King and his band of elite rogues known as the Black Shields. Regmar uses demonic magic to ensure he is not captured.
503: Participated in the Quest of Raul the Foole.
504: Landed – Earl Dafydd gives Galien the Estate of Seven Pines as a grant (located in Huntington County near its border with the Anglian Hills). At this point, Galien becomes a vassal knight.
505: Marriage – Weds Lady Sigrid. During the wedding party, a local sheriff presents Sir Galien with a Damascene shield which was discovered earlier in a stash of loot hidden by the marsh troll known as Scary Harry. The shield was given to Sir Galien because he was the one who killed the creature (in A.D. 501) and the rightful owner of the shield cannot be determined. Galien named the shield Praesidio Honos (“Honor’s Guard”).
506: Birth of Aelfred, son of Galien and Sigrid.
Galien joins a mission to finally put an end to Regmar the Brigand King and his band of outlaws known as the Black Shields. Galien and his allies manage to find and enter Regmar’s secret lair, and in the ensuing battle, Sir Donecus stabs Regmar with his magic sword which possesses a slaying power applicable to Regmar and any of his blood descendants. Although the special power of the weapon greatly wounded him, Regmar was able to resist its full effects and he strikes Donecus unconscious with his own enchanted weapon, the Mace Malevolence. Sir Damahaut, picks up the slaying sword and kills Regmar. When Regmar’s helmet is removed, his identity as Sir Taurinus is revealed, being the father of Donecus who has been missing for years. Donecus now knows that he, himself, is susceptible to the slaying power of his sword.
507: Attends the 1st Banbury Fair (Barony of Tribruit).
508: Battle for London – Galien assists in capturing Lud’s Castle from its Saxon occupiers. 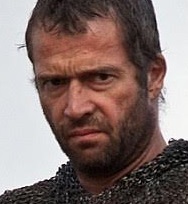