Origins:
Thelsadar is the son of Sir Haldoran and the Lady Lyovah. Haldoran was a footsoldier who was knighted by Duke Ulfius after showing commendable bravery on the battlefield, but was not taken into the duke’s household. In light of this, he began to seek employment as a mercenary knight. Prior to her marriage, Lyovar was a cook for the household of King Uther Pendragon.

In Lyovah’s native village in Barony of Brun, there is a story that her paternal grandfather, a stonecutter known as Aglogon, had a large key fashioned from black iron. Its presence often unnerved him, and he sometimes referred to it as a “cursed responsibility.” One day in the early morning, he rowed a boat onto a large pond in the Sauvage Forest and sank this strange key in the dark water. When asked what the key was, he would only say, “Be thankful that I do not burden you with that knowledge!” When asked why he discarded it, he would reply, “I did it for my family; the shadow in our lineage must finally be lifted!” Within a week of dropping the black key into the pond, Aglogon was struck with a serious ailment in the form of a high fever and ragged cough. Within a month, he was dead, taking the secrets of the mysterious key to his grave.

491: Thelsadar is born in the Barony of Brun, the son of Sir Haldoran and Lady Lyovah.
493: Haldoran hears that Earl Dafydd of Huntington is hiring large numbers of mercenary knights to assist in his battles against encroachment of more recent Saxon immigrants. Naturally, Haldoran signs up and moves his family to the Town of Beale Valet.
506: Squired: Joined the Company of the Crimson Hawk in Beale Valet in Huntington. This includes being mentored by Sir Damahaut.
Attends the 1st Banbury Fair (Barony of Tribruit).
507: Thelsadar joins a mission to finally put an end to Regmar the Brigand King and his band of outlaws known as the Black Shields. Thelsadar and his allies manage to find and enter Regmar’s secret lair, and in the ensuing battle, Sir Donecus stabs Regmar with his magic sword which possesses a slaying power applicable to Regmar and any of his blood descendants. Although the special power of the weapon greatly wounded him, Regmar was able to resist its full effects and he strikes Donecus unconscious with his own enchanted weapon, the Mace Malevolence. Sir Damahaut, picks up the slaying sword and kills Regmar. When Regmar’s helmet is removed, his identity as Sir Taurinus is revealed, being the father of Donecus who has been missing for years. Donecus now knows that he, himself, is susceptible to the slaying power of his sword.
508: Participated in the Battle for London as the commander of a squad of 10 footmen. In this capacity, Thelsadar assisted in capturing Lud’s Castle from its Saxon occupiers. 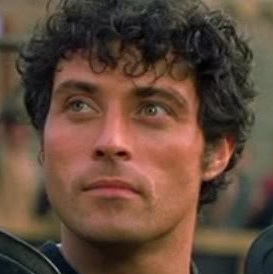