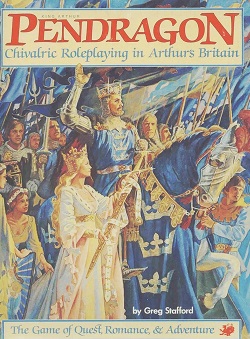 In the mid-80s, Randy R. gave me the heads up that the store Fun & Games in Savannah’s Oglethorpe Mall was having an 80% off, going-out-of-business sale. I arrived there with a speed akin to a teleportation spell. It was there that I spotted the newly released, 1st edition of Pendragon (this was the boxed set, y’all). Because I was already a fan of Arthurian literature, I gave it a shot. I quickly fell in love with the game, as did many of the others in my AD&D group. It has the distinction of being one of the few non-AD&D games that Doc Pendexter was willing to play.

Adventures I ran for the Original Campaign included Chaosium’s The Tournament of Dreams and The Grey Knight, both of which are (IMHO) some of the best fantasy role-playing adventures ever written. 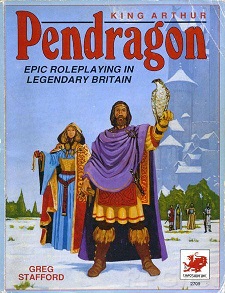 #2: THE CAMELOT CAMPAIGN
Timeframe: 1990 through the mid-90s
Pendragon Rules: Initially 3rd edition, upgraded to 4th edition (in 1993).
Initial Setting: Logres (Phase 2)
Location: Abercorn Terrace Apartments (Savannah), initially in my one-bedroom apartment, and then later in the large apartment I shared with Ron W.

Chaosium never published the 2nd edition rules for Pendragon, which is why this campaign was launched with 3rd edition. The campaign started in A.D. 525 with the knighting ceremony of Sir Lancelot. This particular campaign was known for largescale battles and tournaments. One of the most memorable battles was the Roman War of A.D. 527 which began with the armies of King Arthur and the Roman Emperor facing each other under the flag of truce. The player-squires were standing next to Sir Gawain who lost his temper at some words spoken by the emperor’s cousin. Gawain immediately beheaded him, the jaws of the players dropped, and the war began! Gawain actually did this in the legends, incidentally.

In the Camelot Campaign, there was one tournament with a Grand Melee so large, we had the lists of the various teams taped along the walls, and it took several sessions to complete. One NPC that stands out in my mind is Sir Wigglypickle. I intentionally gave him a dopey name but awesome stats. The players went from laughing at his name to saying things like (and here I’ll quote Bryon Gerber), “That Wigglypickle is a badass!” This is also the tournament where Sir Lancelot was knocked out by an obscure, ordinary Jewish knight. This event was not “scripted” by me; it all came to pass due to the dice rolls. I think we were all collectively stunned! But it happened, and actually worked well with the campaign’s storyline (i.e., it served as a “wake-up call” for Lancelot).

The Camelot Campaign also featured a particularly challenging adventure called “The Dragons of Malahaut”, a Pendragon adventure published by Chaosium.

Another notable aspect of the Camelot Campaign concerns Ron W.‘s character, Baron Nwydor of Sockburn. When I calculated the glory awards from the final session, Nwydor broke the 16,000 Glory Total threshold, making him the first player-knight in any of my campaigns to achieve the status of “Legendary”. At the time I’m typing this, Nwydor is actually the only one so far, but I predict I’ll see some more Legendary Knights among the current Huntington Campaign gang!

An ongoing humorous feature of the Camelot Campaign involved Alex S.’s Sir Gwefrfawr (a.k.a, “Doom Shadow”) and his run-ins with people of the entertainment industry (minstrels, actors, etc.). In one instance, Gwefrfawr overheard a couple of actors planning his death. He burst through the door and beat them up. He then discovered that they were merely rehearsing a play based on him (and a fictional exploit about an assassination plot). And, yes, I gleefully and shamelessly stole the idea from the “Black Adder” TV show! 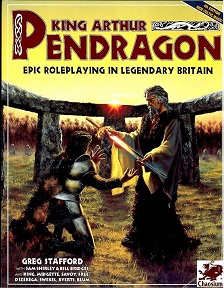 This was the campaign I ran mostly throughout my seminary career as well as the first couple of years of my priesthood. As such, the actual sessions were few and far between (for example, while in seminary, they were confined to my brief winter and summer breaks). This time around, I wanted to do something different, so instead of the usual setting of Camelot, I centered the campaign on the Cambrian kingdom of Escavalon. For this purpose, I used the Pendragon supplement Savage Mountains.

In terms of quests, I took The House on Hangman’s Hill, one of my favorite Judges’ Guild adventures, and modified it for Pendragon rules. I added some stuff to it, including an orangutan named Grong who, through sorcery, had achieved a high level of intelligence and managed to convince a tribe of goblins that he was a god.

This campaign has the distinction of being the origin of the Riddle Quest. In other words, I came up occasional puzzles for the players to work on away from the gaming table. Here’s one that really stands out in my memory. On one occasion, we finished an adventure that took place in a spooky manor house where there were things such as enchanted webs and a painting of the sea beset by rain. The quest included going to the chapel to hunt down the “voice of a choir”, and following a talking bird that led people to a clue while saying, “Come away.” At the end of the adventure, I told the players that I would give a glory bonus to the first person who could tell me what I based the quest on. A few days later, Jennifer P. emailed me the correct answer. She was driving around listening to a classic rock station which happened to be playing Stevie Nick’s “Edge of Seventeen”, and recognized aspects of the adventure within the lyrics.

The Cambrian Campaign occurred at a time that a bunch of us watched a lot of WWF. I had a number of NPCs modeled after some of the wrestlers at the time: Roc (i.e., The Rock), Curtis Jericho (i.e., Jericho), Payne (i.e., Kane), Stone Cold Stefano Houston (i.e., Steve Austin), Takeri (i.e., Yoshihiro “Yoshi” Tajiri), Tomer T (i.e., Booker T) and Typhoon (i.e. The Hurricane, and beware his superpowers, “Bee-ATCH!”). The player-characters fought against these colorful adversaries in tournaments (initially in a bohort when they were all collectively squires, and then later as knights in Grand Melees).

As an interesting side note, it is for this campaign that I created a map of an area known as the Duchy of Devinsmor. After making some revisions, it is now the map I use for the AD&D sessions I run at gaming conventions. 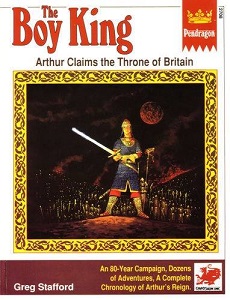 During my 2014 summer vacation in Savannah, I visited the newly established Guild Hall and spoke with Clegg Ivy about the gaming possibilities it presented. I had been on a hiatus from GMing Pendragon for about 8 years, and figured it was time to get back in the saddle. So on the fateful night of June 25, 2014, in Room 224 of Extended Stay Hotel (Abercorn St. near DeRenne), I turned on my laptop in the hotel room, and created the Savannah Pendragon League FB page, announcing an initial game session at the Guild Hall on July 18. My chosen background music for this endeavor was Rush’s “A Farewell to Kings” CD.

This campaign has the distinction of being the first time I used The Boy King supplement, as well as starting things off in Phase 1, rather than 2. In preparation for the campaign, I looked long and hard at the Pendragon map, trying to figure out the best setting to use. I finally decided on Huntington County because it was close to where Camelot would eventually be located, and was next to some prime adventuring areas such as the Fens, the Sauvage Forest, and the Saxon-controlled areas of south and east Britain. It was quite awhile later that I noticed that the alley that runs behind the Guild Hall is called Huntingdon Street. What a cool coincidence! 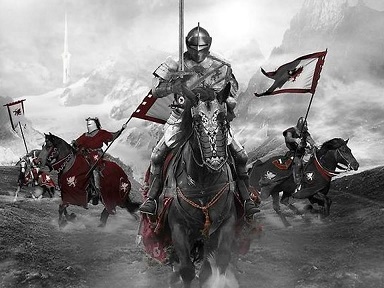 I am inspired by the fact that Gary Gygax ran his Greyhawk Campaign (1st edition Advanced Dungeons & Dragons) up until he died, as did Dave Arneson with his Blackmoor Campaign. All of my former RPG campaigns have lasted, at best, a few years, but Greyhawk and Blackmoor spanned decades! Obviously, anything I do will never achieve the fame and prestige of the campaigns of those giants in the field of gaming, but I want to at least do an entertaining campaign with some real honest-to-goodness longevity! Not only is Pendragon the game that I enjoy the most, but it is also designed for campaigns with long timespans. So it is my plan for the Huntington Campaign to not simply be my fourth Pendragon campaign, but also my last, with me running it as long as I’m able.

With this in mind, I want to take this thing all the way, from the death of King Uther to even beyond the death of King Arthur. We’ll hit all the big events, such as the legendary Quest for the Holy Grail, which is something that I have never run in the past.

For those of you along for the ride, here’s something to keep in mind. We are currently averaging 10 game sessions a year, and I predict that we will annually cover about 6 game years (because some will require more than one session to complete). Assuming that the Quest of the Holy Grail will take place corresponding with the Pendragon timeline, here is what you can expect (more or less).

- The Huntington Campaign’s Quest for the Holy Grail will begin in A.D. 554, at the end of Phase 4. In the real world, this may not possibly happen until the mid 2020s or later. Keep in mind that the Quest for the Holy Grail is the last great quest of the Round Table, so there’s A LOT of other stuff that happens prior to it. Hence, no need to be in a rush to find that sacred chalice!

- When the Quest of the Holy Grail begins, the current knights in the party will either be dead or enfeebled in their 70s.

- If the eldest sons of the current knights are still alive at that time, they will probably have been forced into retirement. After all, they will be pushing 50 and will have lost a few points in statistics by this point.

- There is a good chance that the knights who will actually go on the Quest for the Holy Grail will be the grandsons of the current knights. They will probably be in their mid-twenties at the time. Moreover, seeing as this will be towards the end of Phase 4, they may be adorned in full plate armor (i.e. 16 armor points!) and riding Frisian Destriers (i.e., 9d6 lance damage!).

After the Quest of the Holy Grail is over, and after King Arthur dies, is there any reason to end the campaign? Greg Stafford suggests starting over at Phase 1 with a new campaign, but I will not do that. After all, the history of Britain goes on, and so can the campaign. We will see how long we can keep this thing going, eventually playing the great-grandchildren of the initial characters, as well as descendants beyond even these!

by: Celtic_Cleric
See All Pages