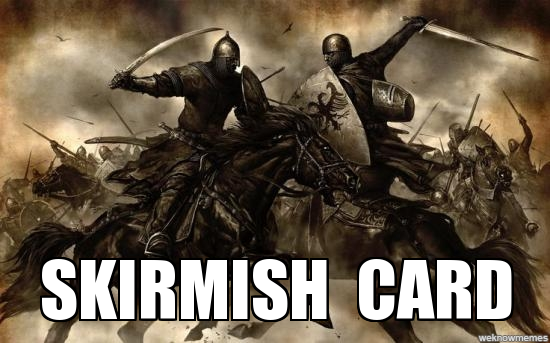 A Skirmish Card may be expended in order to allow one of the following options:

1) Adjust Combat Skill Roll: This option is applied to a combat skill roll, which may be either opposed or unopposed. After a combat skill roll is made, the Skirmish Card can be used to adjust the result from 1 through 3 points. These points may be either added or subtracted, but they can only augment the roll of the character who actually expended the Skirmish Card. For example, if a knight has a Sword Skill of 17 and he rolls a 19, he can use a Skirmish Card to subtract 2 from the result, lowering it to a 17 (and therefore gaining a critical success). In terms of another example, let us say that this same knight rolls a 5 with his sword while his opponent beats him with a roll of 7. The knight could use a Skirmish Card to add 3 to his result of 5, raising it to an 8 and therefore allowing him to be the victor in that exchange.

Note that Option 1 can be used with any combat skill, including Battle and Horsemanship. Moreover, a Horsemanship check does not specifically have to be in the context of actual combat in order to be benefited by a Skirmish Card (i.e., it can be used while hunting, competing in a horserace, etc.). Naturally, competitions involving non-lethal combat can be enhanced by a Skirmish Card as well (i.e., jousting, rebated weapons, “first blood”, etc.).

2) Enhance Damage: After a player rolls a set of damage dice, he can use a Skirmish Card to replace the result of any single die with a 6. For example, if a knight does 5d6 damage with his sword and rolls a 3, 3, 4, 5 & 6, he can invoke a Skirmish Card to raise one of the results of 3 to a 6. Hence, instead of causing a total of 21 points of damage, he strikes for 24 points of damage.

3) Lessen Damage: After damage dice have been rolled against a character, the character can use a Skirmish Card to subtract 6 points of damage from the attack. For example, a sword blow that initially causes 25 points of damage can be reduced to 19. The player must decide to invoke this power after the damage dice are rolled, but before the action in that round moves on to the next thing. This option is applicable against anything causing physical damage (weapon, acid, fangs, etc.) including things that did not arise from combat (i.e., falling damage, a trap, an avalanche, etc.).

Additional Notes:
• A Skirmish Card does not have to be used by the end of a game year. If not needed, it can be retained in the character’s folder for future use. In the interest of game balance, the GM reserves the right to limit the total number of Skirmish Points a character has at any given time.

• A character with multiple Skirmish Cards may use more than one in the same round, and two can even be “stacked” (i.e. combined) regarding the same option for the same event. For example, let us say that a knight has a total of three Skirmish Cards in his possession. If he wants to use Option 1 while fighting his opponent, he can use one Skirmish Card to enhance his weapon skill roll on a particular attack by +/- 3 points, or two Skirmish Cards to enhance it by +/- 6 points. However, he cannot add his third Skirmish Card to try to further adjust that particular roll. Nevertheless, he can use the third Skirmish Card during that same round for another application (such enhancing damage caused, lessening damage inflicted upon him, or modifying another combat skill roll, assuming he has another one coming to him that round).

by: Celtic_Cleric
See All Pages